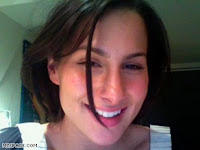 Ashley Alexandra Dupre moved to Manhattan to pursue a career in music. At US $5,500 an hour, it must have been a performance comparable to an entire rock band backed by an orchestra and chorus singers; even if she was alone playing only the organ. The now infamous "command performance" at the pleasure of resigned New York Governor Eliot Spitzer, has compelled the would be singer to reveal herself in her MySpace site, singing a sad story that sounds like a broken record.

After several days of being written about as "Kristen" the prostitute, she felt she 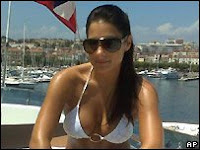 was being painted as a monster, which would not advance her career in music. She wants to be written about as a performer, and perhaps be recognized for the singing, not the sex - after all, she was not contracted for a song. Ashley's boldest statement is that her music flows from what she's been through; that if she had not experienced the Hard times, she would not appreciate the Good times. This statement is a blur since the Emperors Club's reputation is that its "escorts" even get trips to Paris, London, and other vacation spots with their customers for several days of playing music together. It's difficult to tell which is "Hard" and which is "Good" - or is it? 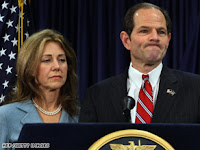 Ashley also said she is all about her music and her music is all about her, and while she didn't mention Donna Summer among her influences, one may be tempted to think that Summer's 70's hit "Hot Stuff" is among her all time favorites. Meanwhile, Eliot Spitzer, the erstwhile "Sheriff of Wall Street" , identified by the Club as customer number 9 who foolishly donned the "Emperor's new clothes", has been exposed - barenaked. His once rising star has been swallowed by the black hole.

Harold Meyers of the Washington Post speculates that the price of $5,500 per hour, dictates the value, meaning it is available only for the wealthy and those who have really made it. This, according to Meyers, is a turn on in itself. Thus, even if a single engagement does not churn out the expected explosions of ecstasy, the knowledge that few men can afford this value for several evenings spread over an 18 month period, is satisfaction enough. This ego-trip is what caused New York's Eliot "Ness" to Nest with the escort Kristen, making the former Untouchable breakable and amenable to his companion's organ playing skills and talent.

The sad song being played by Ashley seems adopted from the beginnings of Madonna. The interview she gave highlighted her career in music rather than the current issues haunting customer 9. It is taking advantage of the news spotlight to launch herself into stardom, making hay while the item is hot. Judging by the song she wrote published in her site entitled "What We Want", she'd be better of putting out a perfume brand called Customer # 9 and give Chanel a run for their money.

Haaarrrrwwwwk...Twoooooooph...Ting!
Posted by durano lawayan a.k.a. brad spit at 11:48 PM

Hi and congrats on a really super blog.

I found you thru the comments on DD2's blog.

Good luck and keep up the good work

Girl doesn't have a bad voice, but the song does indeed SUCK. No pun intended! ;)
I'm just wondering how far she can ride this wave of notariety. Remember, we are now living in the age where being bad can get you lots of good perks, like magazine layouts, reality shows, papparazzi, tabloids and blog sites following you and detailing your every wink, blink and nod...
Look how well it worked for Paris Hilton.
Back in the day, getting caught having sex on a tape, or even having nude pics of you exposed to the world meant the end of a career.
Nowadays, it marks the beginning of one. Kim Kardashian immediately springs to mind.
So, let's see if the tables really have turned. If the public is able to forgive a prostitute, and allow her to move on to a higher rung on the food chain, then I guess we really have evolved.
By the way, Monica Lewinsky STILL bears the stink of her indiscretion with Bill, and she wasn't even getting paid! Flash forward a few years later, and what she did is no biggie compared to what others have done!

P.S. This would never have flown back in my Mama's day!

Say what you will....She'll net more with this song and "career" than she made at the EC. This was her "American Idol." And I for one wish her the best...As for the hypocrite???? Well he can rot in Hell! Make you're mark going after largely young Wall Street types, then turn around as a much more "mature" man and do what the 20 somethings were doing that you punked out??? Hypocrite. He deserves whatever humiliation comes his way!

Thanks. DD2 is a friend, and even if we don't always agree, we both respect each others opinion. --Durano, done!

I can picture your expression while reading your comment. Eyes wide open and glaring, voice one decibel louder, hand gestures abrupt and forceful,all done in a defiant pose.

Times have really changed and so have values. The most talented has been replaced by the most notorious. This is also perhaps due to the icons of the past falling prey to scandals and arrests. Plus the adage that says good or bad publicity is still publicity. Well, it certainly is, and the badder it is, more write ups are done.

In a society that's increasingly being transformed into a consumer's mall, everything is treated as merchandise, and this is just another transaction. This might be the prevailing attitude. --Durano, done!

Are you suggesting a title here? I didn't want to write about Spitzer but about Ashley, and what she's doing to get herself into a career in music.

The hypocrite is down! And Out! I have a strong feeling his wife will divorce him and leave him penniless.

As far as Ashley is concerned, there will be those who would ride on her sudden fame and she would also benefit from it. As I mentioned above to Fitness Diva, everything is treated as merchandise, and I'm sure a recording contract will be her next transaction.

I wonder if she will be invited by Ellen Degeneres or Oprah, that would certainly put her on top spot.

Thanks for the visit and drive safely. --Durano, done!

She's appearing at BB King's in New York this week, so she must have someone's confidence in her talent.
I think she will get a deal, or at least a single from this whole fallout, but in the end she will just fade back into the background like Jessica Hahn, Donna Rice and Monica all have.

Enjoy it while it lasts, girlie!
By the way, I wish her no ill will.
It's Spitzer that's the unforgivable evil in this little melodrama....

I guess she's getting something out of it like she probably hoped she would. I wonder if she'll be paid per set or per hour? Just Kidding. I'm with you on Spitzer. I never could stand hypocrites. --Durano, done!

It was bad enough having to go thru New Jersey governor McGreevy's scandal, now this and now Gov. Patterson, too???

When men reach for power and they begin to feel its forceful capability, they get so consumed by it that they would reach for the forbidden elements thinking they could get away with it; or that they are above the law.

Sex is always a power game for such men, it is power over women, power over modes of conduct and behavior, power to acquire what few men can afford. The insanity it brings them to is limitless.

In the case of Paterson,they had a falling out, got partners, then got back together. I guess they feel having extramarital affairs under those conditions was acceptable than securing expensive paid sex. And perhaps it is. Besides, Love is blind in this story.:-) --Durano, done!

I am Durano Lawayan a.k.a. Brad Spit

My orientation is that of a management consultant. I am naturally drawn towards change for as long as it is sustainable and possesses real long term benefits. If we have to change by going back to basics like organic food, less transfat, zero carbon emissions, I'm all for it.

There are many things we have been made to accept, drummed into our brains since we were kids; that these were true, unchangeable, and permanent. Well nothing is permanent and anything can be changed. What was true before may be uncovered today for the phoniness that it was and is. I keep a questioning attitude and a persistent orientation, balanced by a positive outlook.

I love to laugh and enjoy life, and hope the pain brought about by what is wrong in this world is somehow diluted by this merriment.