Never in the past ten centuries have policies brought more peace and prosperity to China's citizens than in the last two decades. Recent graduates of China's educational system are the most forward looking bunch since expectations of a lifestyle with their own homes, cars and gadgets, fueled by double digit economic growth throughout most of their student lives, are within reach. Young professionals have not experienced repression, Tienanmen is a distant, if not unknown event, and their concerns have been allowed to dwell in the realm of personal and economic development and growth; largely through the efforts of its government.

This, coupled with an overhauled educational system that inculcates the vivid oppression suffered under foreign invaders in

the 19th century, while glossing over the Cultural Revolution and suggesting that Chairman Mao's dictatorship was a 30% arithmetical mistake, period; is the foundation of the fierce loyalty and intense patriotism of China's educated youth. They are the biggest beneficiaries of the country's rise as an economic giant and an emerging military power.The absence of exposure outside the academe that would provide a wider perspective other than the government's viewpoint is a limiting experience. Studying is the major, if not sole, focus. 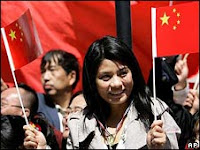 China has successfully developed a citizen's defense line of educated and computer savvy young professionals who are adept at defending and countering global animosities toward their beloved country. Their rightful pride in their country's accomplishments find unquestioning support for the government, and drives them to close ranks and take action against those who malign their government's policies, especially those that pertain to Tibet. They cannot comprehend why Tibetans would refuse improved incomes and a better financial future, opting for a return to a feudal society instead.

In recent weeks, they have been able to organize counter rallies in other countries 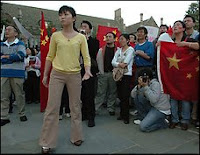 versus the Olympic torch protests, used photos of Chinese supporting Tibet and plastered these on websites with their complete identities, background, and relatives in China for harassment and vilification. Calls for boycott of French products flood Chinese websites; and some Chinese have taken their reactions offline, targeting specific individuals using information on what is referred to as "Human Flesh Search Engines". CNN was a target for service interruption in some parts of Asia yesterday, believed to be a result of attacks by China's bloggers. Chinese authorities have cautioned its citizens to curb their patriotic zeal and warned against endangering open policies for foreign investment. 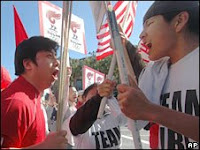 China's citizens have anchored their dignity on the Olympics and are extremely proud of being hosts for the Games. They expect more open and informed communication as a result of first hand-inside knowledge of the country, and hope to establish better relations with nations of the world. They view western media's portrayal of China as biased and are inclined to think that envy of their progress and a desire for their failure propels this initiative. Majority believe that the issue of Tibet and human rights be tackled after the Games, as losing face will affect the nation's momentum. Protesters are in danger of making enemies of everyone in China if they persist. 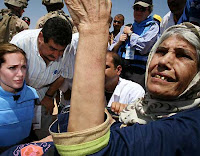 treated the Native Americans and the African Americans. Also, that Tibetans are better off than their Iraqi or Afghanistan counterparts from the way they were invaded by US and British forces; while human rights at Guantanamo and rendition by the US have been going on for some time. From the Chinese citizens' perspective, based on their studies of history and internet access, the west has often used a double standard in passing judgment on other countries' actions while covering it's own transgressions with hype, denials, falsehoods, skewed opinions, half truths and blatant lies. The current theme being used by the west that China will host the Games to parade itself is seen as a narrow point of view perpetuated by a condescending attitude, disguised as concern for justice and human rights. It is meant to downplay the admiration for the efforts of the country and its citizens. These are the reasons why China's citizens believe the issues are being drummed up.

From this perspective, they have a valid point.

I agree. At least, from that point of view, they are indeed correct. As they pronounce it in new Zealand, yu are korict!

I think it's time to put an end to using politics to disrupt the games. The US boycott of Moscow, and the subsequent boycott by Russia of the Atlanta games accomplished nothing. These are just disregarded footnotes that make both countries look even childish and silly.

Besides, think of the athletes who trained long and hard, sacrificed so much, for a shot at fame, at least personal glory in having participated. Politics be damned! :-)--Durano, done!

Brad, China has been so far removed from America's awareness taht it hurts. We borrowed money from them. We were fighting them by proxy in Vietnam. Years ago they were run by war lords. Chan ki chiek, Spelling is bad fought them and lost to Mao. He moved to Taiwan. We recognized Tiawan, but not China. and it has been cold ever since. I dont know when we made them a favored nation status, but it happened. We are on so blind as not to recognize they are rebuilding their military.....stay well.....

I do have to agree, for the most part. As far as shedding a world wide light on the issue, just in case a few were thus far unaware, well, that has now been accomplished.
This really is the wrong forum on which to address this, as it has to be getting into the heads of some of the athletes, and that's not fair either. They've worked and trained hard for their one moment in time. For some, a possible medal is the result of a lifetime of effort and dedication.

And check out China, pulling the US's card on human rights violations! Touche'! But they are right. The pot cannot call the kettle black in this case. The US can do what it wants to who it wants as long as it serves the purpose of "the people", but then try to police someone else for doing the same? Good counter punch, China.
And the patriotic masses of China are not to be messed with and pushed too far, I'm thinking.
When it's just the government pushing these policies, that's one thing, but the fact that their people are so vehemently and actively willing to back it up, and use any means necessary to do so (outing protesters and exposing their personal info to the entire society...wicked!) makes one have to take pause.
And they were able to sabotage (partially) CNN for a day, did you say? WOWWWWWW. Now they're starting to flex those newly developed muscles of theirs! Somebody had better duck!

I don't think we really want to awaken and anger this up until now sleeping giant! US and other detractors beware!

It was President Richard Nixon who re-opened ties with China because of the political reality of the existence of 700 million people at the time that no one could ignore.

As I mentioned in a previous post, China is set to be a global military power following their current economic dominance.
Their only problem now is the speed and capability at which they can deploy their forces. That is not to difficult to solve, and the world must take them seriously as well as consider the loyalty and patriotism of their new generation civilians.

America's divisiveness is no match for the consolidation the Chinese are displaying towards their government's policies and programs.
:-)--Durano, done!

All boycotts and protests did not serve any purpose except to deny athletes their Olympic moment because of politics.

China's citizens are taking up the cudgels for their government since the protests against their hosting the games is being done also by civilians. But these savvy counter protests have gone a step ahead - exposing the identities of protesters.Plus, they have given notice that no western power has the right to question them when their own backyard reeks of human rights violations and long histories of oppression of minorities.

All they are asking is for these issues to be discussed at a separate forum. This is the Asian attitude at work. Sports is sports, lets deal with these events and have openness and understanding because of it. Then, when the openness is established, we can both sit down and see the issues in a brighter perspective. That's the way of the Asian. Don't mess up my party and let me lose face because the yard has some debris. Besides, only animosity was the result of boycotts in the past, except of course Munich in 1972.

The western approach of confrontation is being rightly resisted by China, perhaps for the sake of the games, their own image, and the athletes as well. The citizens, well, it's their pride and honor; and they want their dignity as a nation and ancient culture restored after studying all the humiliation they suffered in the 19th century under the western powers. Studies presented and discussed like it happened very recently. This is one secret element in their loyalty and patriotism to their country. :-) --Durano, done!

I am Durano Lawayan a.k.a. Brad Spit

My orientation is that of a management consultant. I am naturally drawn towards change for as long as it is sustainable and possesses real long term benefits. If we have to change by going back to basics like organic food, less transfat, zero carbon emissions, I'm all for it.

There are many things we have been made to accept, drummed into our brains since we were kids; that these were true, unchangeable, and permanent. Well nothing is permanent and anything can be changed. What was true before may be uncovered today for the phoniness that it was and is. I keep a questioning attitude and a persistent orientation, balanced by a positive outlook.

I love to laugh and enjoy life, and hope the pain brought about by what is wrong in this world is somehow diluted by this merriment.